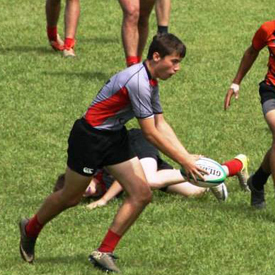 It was a game of contrasts, with the big Charlotte pack powering ahead with their forwards, and Raleigh holding their defensive line and trying to get their backs going. With back row players Jack and Tom Kiernan playing solid defense, Raleigh was able to bend but not break when Charlotte had the ball, and that was enough to get their backs running.

It was a warm day, and that took its toll on both teams, but perhaps more on the bigger Tigers team.

The victory capped off an undefeated season for Raleigh, who also hosted the Canada national 7s team last week as they prepared for the final legs of the Sevens World Series.

With their own impressive field out in the woods away from the city, they have built a nice home for rugby, and with this state championship, they have some new decoration for it, as well…